are 2Men In Black

A versatile 2-man guitar/vocal act focusing on great songs with outstanding, soaring harmony. They perform a wide variety of AM radio pop music from the late ‘50’s through the 1960’s.

As published songwriters they occasionally perform original material. Both list The Beatles as a major musical influence and credit them as the reason the strapped on their first guitar. Naturally, you’ll hear many Beatles hits along with other great tunes from before and after the British Invasion years in their repertoire of well over 100 songs.

They sing and play their music with the same arrangements as originally done. A two-minute song will remain two minutes without unnecessary fillers to stretch it out. As a result, they’ll perform 18-20 songs per set … about sixty every show.

Through their song selection and relaxed informal style,  (FYI, Black Tie is optional!)

2Men In Black have proven appeal to all age groups. So come on out and catch their next show and be ready to rock, roll and reminisce. Don’t be surprised to find yourself singing along! 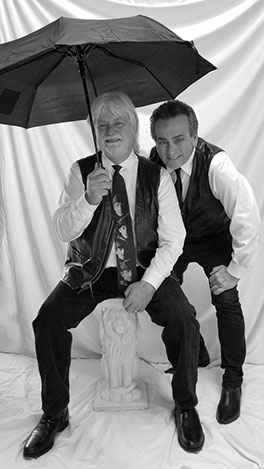