2MEN IN BLACK are “What’s Happening!”

2Men In Black play lots and lots of the music that everyone remembers … yet do their best to avoid the same old songs that you hear every day on the Chicago area oldies radio stations. By nature, they favor the classic tones and harmonies of The Beatles, but wait … there’s more, so much more to the style and sound of 2Men In Black. Of course, you’ll hear the sound of the ‘60’s British Invasion groups but it doesn’t end there. The Beatles shaped their signature sound on the recordings of many other artists. So, it’s a given that you’ll also hear the soaring harmonies of The Everly Brothers and the rockabilly guitar sounds of Buddy Holly and Carl Perkins. No doubt about it … many American groups and artists were influenced by the Beatles. 2Men In Black consider it their duty to cover lots of material from those pop groups and artists on this side of the Atlantic as well. We also love to re-visit the fabulous sounds of our own Chicago based ’60’s groups like … The New Colony Six, The Buckinghams, The Shadows of Night and others!

If the Classic Sounds of the late ‘50’s right through the ’60’s rings a musical bell for you … consider having an unforgettable evening with us … Chicagoland’s Fab ‘60’s Duo.

You can check out our extensive song list and click on the links for our song samples to hear a little of our music. Be sure to also give a listen to our 7-minute song sampler “commercial” that’s available on this website.

PS. We’d like to address the 800lb Gorilla that you’ll notice on our website. Not a real gorilla, but more likely it’s a bit confusing because some of our videos and music have us performing as “Radio Flyer.”  We had been appearing as Radio Flyer since 1999. Unfortunately, in early 2020 we received a cease-and-desist letter from the little red wagon people’s corporate attorneys telling us in no uncertain terms to find another name for our act. Then came the pandemic and since the shutdown we just haven’t been able to redo the media. So, just know that we are no longer known as Radio Flyer and we are now proudly 2Men In Black. 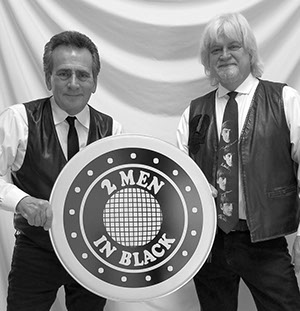 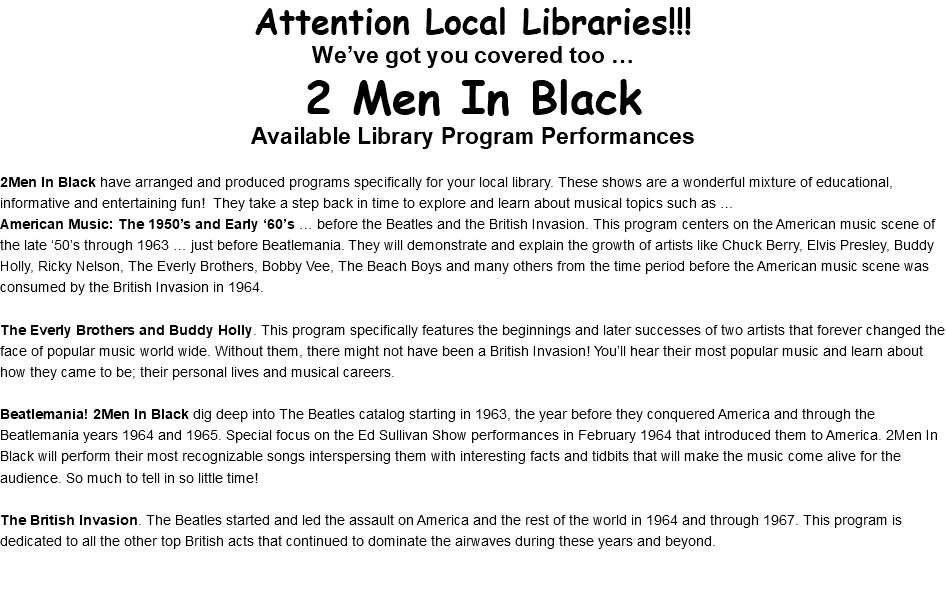