Ray and John first met in the 1980’s as part of a larger band called “Sundance” and later “The Look.”

After performing for several years at many venues all around Chicagoland, including casinos, festivals,

futile and when they (the wagon people) threatened lawsuits, a name change was inevitable.

publicity photos, business cards and much more. They decided to use many of those

recordings, demos, photos, etc. on their new website and changed their name to

2 Men in Black will blow you away with their harmonies in songs by the Beatles, Beach Boys, British

Invasion and so much more; even local bands like New Colony Six, The Buckinghams and

Shadows of Night. They are serious musicians but don’t take themselves too seriously and play

the songs the way you remember them, encouraging everyone to “Bring Along Your Singalong!”

Published songwriters, they have recorded professionally and have performed onstage at The House of

check back often as we will be uploading more videos all the time! 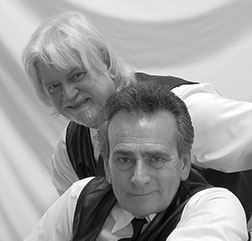